The fashion magazine W has shared its annual ‘Best Performances’ edition, complete with some fun and stylish photographs, courtesy of the fabulous Tim Walker.

They tweeted a thread of the lucky stars who made the cut.

The stylings were all … interesting.

Will @Gemma_Chan be returning to the #MCU as Sersi in #TheEternals? “Yes, Marvel owns us for life,” she says, laughing. Read on, here. https://t.co/3II7PgC8L9 pic.twitter.com/1CutOhSvi2

For Cate Blanchett, filming @RealGDT‘s #NightmareAlley was a bright spot amid the pandemic. “I’ve always been fascinated by the circus or carnival world,” she says. “I saw my character, Lilith, as a beacon of truth in a perverted way.” Read on, here. https://t.co/lD2GUqhmvP pic.twitter.com/v9Rz31FcFa

Tilda Swinton and Honor Swinton Byrne aren’t just mother and daughter, they play them on screen in ‘The Souvenir Part II.’ “So much of our lives went into the film,” Swinton says. “Most of Honor’s clothes came from my cupboard!” Read on, here. https://t.co/o8or65r0Hz pic.twitter.com/MhzpgqcYWN

While Adam Driver and Denzel Washington looked like they were off to a Golden Globes ceremony, Benedict Cumberbatch was altogether more decorative, as he found himself in the collection due to his performances in The Power of the Dog and The Electrical Life of Louis Wain .

“The big takeaway from this film is to understand that strength comes in very unexpected forms,” Benedict Cumberbatch says of #ThePoweroftheDog, the Golden Globe winning film by Jane Campion available now on @netflix. Read on, here. https://t.co/wbS1NM5xwh pic.twitter.com/Ei32MP3F1P

His outfit put people in mind of a very different celebrity. These were the funniest responses.

looks like a comeback interview with Ali G where he bares all and says he regrets everything he did pic.twitter.com/0xtTbGw5rb

At a glance, I genuinely thought this was AJ from Backstreet Boys 👀👀👀 https://t.co/G0aopyPwPI

“Ali G, who now goes by his birth name Alistair Graham, has been through a lot since his cultural peak in the early 00s, culminating in hit movie ‘Ali G Indahouse’ and ‘Da Ali G Show’.

His past is visibly past him, as he introduces his wife Susan & two kids Jacob & Charlotte…” https://t.co/9kgdgMS6ZX

big up yourself, booyakasha! https://t.co/5CVerpVqb5

” One time when me was high, me sold me car for like 24 chicken McNuggets ” Benedict says talking to Staines News 😅 https://t.co/NIF8gLsZl7

It wasn’t quite all about Ali G.

Why is that the other men look dapper, while Benedict looks like a retiree on acid? https://t.co/OvDgXCJxG0

Obsessed with the hipster Weekend at Bernie’s vibe https://t.co/u5vwl8ZGtC pic.twitter.com/sWZDwxr2fS

crying they got him dressed like tyler the creator complete with the flowers too 😭😭 https://t.co/IoJHcy8YtN 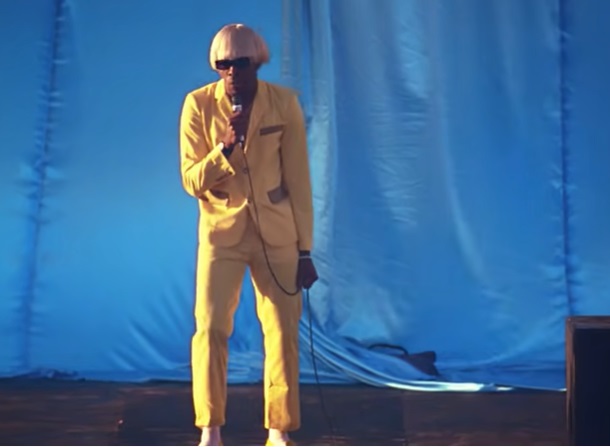 Now I need to see a film with Cumberbatch playing this character https://t.co/0W6P7p0xgI

Brownie points if you can tell us what that film should be called.