How Many Of These Incredible WWE Moments Do You Remember? 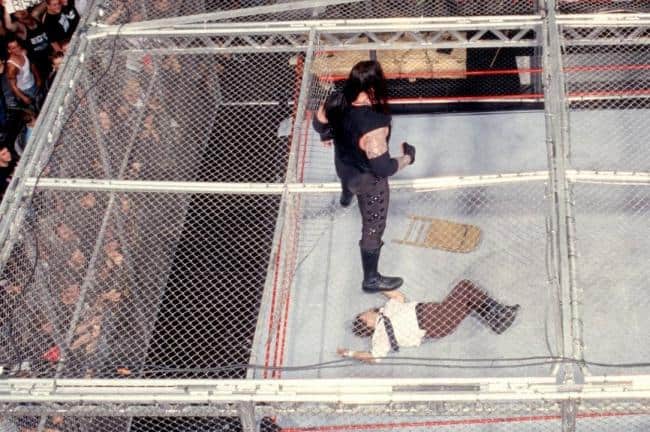 The WWE has brought us countless high-flying, bone-crushing moments over the years, but only the most devoted wrestling buffs will remember them all. Think you’re the ultimate fan? Take this quiz to prove it.

Check off all of these classic WWE moments you remember.

1. When Hulk Hogan accidentally zipped his mustache into his boots and had to frog-waddle around the ring with his face stuck to his feet for the entirety of his tag-team match at SummerSlam ‘88

2. When Bret “The Hitman” Hart put his sunglasses on an eight-year-old fan and the child instantly aged into an old man

3. When Andre the Giant tripped into the stands and crushed eight lucky fans to death

4. When Sergeant Slaughter was justly tried and hanged by a U.S. military tribunal for violating the Stolen Valor Act

5. When Vince McMahon turned the WWE into a family affair, bringing his adult children Doink the Clown and Dink the Clown into the fold as on-air talent

6. When Harriet Tubman was inducted into the WWE Hall of Fame and no one really understood why, but the gesture was nonetheless appreciated

7. When Jim Ross accidentally left his mic on during a bathroom break and treated fans to riveting play-by-play as he passed a kidney stone

8. When Shawn Michaels accidentally kicked 11 birds in row while futilely attempting to do his Sweet Chin Music finisher on Razor Ramon at SummerSlam ‘95

9. When Big Show and the Fabulous Moolah squared off in the ring to determine once and for all which gender is stronger

10. The Raw episode when no one was mad enough to fight each other, so the wrestlers just took turns shampooing each other’s hair in the ring

11. The legendary Hell in a Cell match between Undertaker and Mankind where CTE was invented

12. When Brock Lesnar’s head briefly got swallowed by his shoulder muscles and paramedics had to pry it out with crowbars so he didn’t suffocate to death on his own brawn

13. When a wasp scared everyone out of the ring at the ‘97 Royal Rumble and was named the winner

14. When Paul Bearer revealed that his trademark urn was full of Rolaids

15. When then-president Barack Obama delivered an address on Monday Night Raw announcing that SEAL Team 6 had succeeded in killing the Iron Sheik after years of terrorizing American wrestlers, bringing closure to one of the most painful chapters in U.S. history

16. The incredibly gory and tragic episode of Smackdown that led to swords being unilaterally banned in the WWE

17. When an aging Hulk Hogan started doing his famous “I can’t hear you gesture” but in earnest and it bummed everyone out

18. The 14-hour episode of Smackdown that Terrence Malick directed, which wasn’t bad per se but certainly wasn’t something you’d want to watch more than once

20. The first couple of years after they started leaving steel chairs at ringside when all the wrestlers just thought they were supposed to sit on them

21. When Undertaker did his whole walk-on-the-top-rope bit for two hours straight to distract the audience while stagehands cleaned up after Owen Hart’s fall

22. The time when one of the fake punches actually connected and both wrestlers immediately started crying

23. When WWE fans angrily demanded answers as to how wrestlers can wear those skin-tight spandex undies yet not have the outline of their genitals explicitly visible, and Vince McMahon just calmly explained that it’s because most of the wrestlers are eunuchs

24. When Gene Okerlund’s nipple rings were clearly visible beneath his dress shirt and everyone sort of just silently agreed to not acknowledge it

25. When the Phantom Menace came out and there was that Star Wars crossover episode of Raw where all the wrestlers just took turns doing their power moves on Yoda

26. When the immense popularity of Stone Cold Steve Austin inspired the American populace to give denim trousers—or “blue jeans”—a try

27. When Hulk Hogan, secretly backed by Silicon Valley billionaire Peter Thiel, won a $140 million judgment against Gawker and forced the website into bankruptcy, setting a dangerous legal precedent that imperils the free press and provides a court-sanctioned blueprint for dismantling First Amendment protections

28. When most of the guys died

How Many Of These Incredible WWE Moments Do You Remember?